In Indonesian cuisine, you will find an immense variety of flavors and colorful tropical ingredients. Recipes with strong indigenous influence, but also dishes with Muslim influence (Indonesia is the country with the largest Muslim population), Chinese, Indian, Polynesian, and other nearby regions.

Each island in Indonesia is a world of flavors to be explored, and we are not talking about a few islands, Indonesia makes up the largest archipelago in the world with a total of 17,000 islands, with approximately 6,000 inhabited islands.

Enjoy our guide with over 30 typical Indonesian foods, and nikmati makananmu! (Good Appetite!)

Tempeh is one of the wonders of traditional Indonesian cuisine, made by the fermentation of soybeans in banana leaves. The flavor resembles nuts and mushrooms. It can be consumed in many ways, the most common being fried tempeh with seasonings. Tempeh is an excellent choice for vegetarian and vegan dishes, besides being a probiotic, it is rich in protein and fiber.

Read more: Everything about Tempeh – Indonesia’s most traditional ingredient

Typical of the island of Java, Pecel is a peanut sauce used in salads, which can be served with rice. The sauce is made with peanut butter and various seasonings such as pepper, garlic, kaffir lime leaves, sugar, galangal (known as Thai ginger), and shrimp paste.

The Pecel salad is a very healthy and refreshing dish, composed of bean sprouts and cooked vegetables of “various shades of green” like spinach, endive, green beans, cabbage, and cucumber, seasoned with pecel sauce.

In Bahasa (the official language of Indonesia) gado-gado means “mixture” and this dish takes different types of boiled vegetables – bean sprout, spinach, green beans, cabbage, chayote (a kind of cucumber), and momordica, in addition to potatoes, tofu, boiled eggs, and tempeh, with peanut sauce as a side dish. The sauce for Gado-Gado salad is different from Pecel because it has coconut milk as an ingredient.

Urab Sayur is a typical Bali salad made with cooked vegetables (e.g. spinach, bean sprouts, carrots, and pod), sprinkled with fresh grated coconut and Sambal. It can be served as a meat accompaniment or only with rice, being a great vegetarian option. 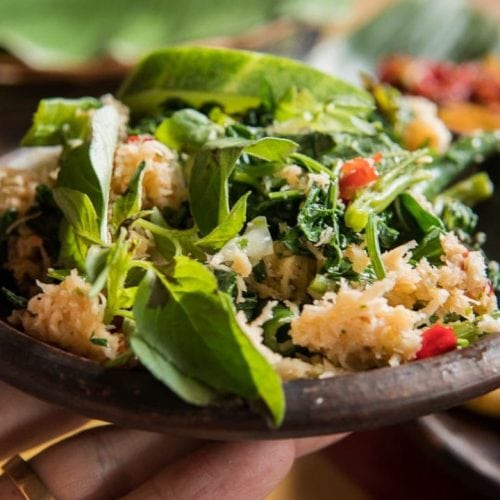 Indonesian Coconut and Vegetable Salad
Urab sayur is a boiled vegetable salad traditional from Indonesia. What characterizes the dish is its dressing made with grated coconut and seasonings. A refreshing dish!
Read Recipe

Sambal is a pepper-based sauce (usually red chili pepper) that serves as the basis for numerous recipes (e.g. sambal terasi, a dish made with sambal and fermented shrimp paste; sambal kacang, made with sambal and fried peanuts). A traditional way to make sambal is to grind the chilies on a stone (called cobek in Bahasa) using a pestle (ulekan), this technique makes the sauce with a good texture and spicy.

As the name says, the dish consists of almost ripe mangoes cut into thin strips covered with sambal (in addition to peppers, the sauce has shrimp paste and a little lemon broth). A great accompaniment for grilled fish and shrimp.

Terung means eggplant in Bahasa – this dish consists of fried eggplants covered with a sambal made with very potent peppers (chili and bird’s eye), garlic, shrimp paste, sugar, and salt.

Satay is meat skewer (can be chicken, lamb, beef giblets, fish, and scallops) topped with sauce, usually made with soy and peanut sauce.

It is a very popular dish throughout Indonesia and every region of the country has its typical satay. An example is the Sate Padang, which originated from Padang (a town on the island of Sumatra) which consists of a skewer with beef or tongue served in a thick sauce made with rice flour and spices such as turmeric, ginger, curry, coriander, cumin, and galangal.

If you want to taste some more exotic satay try Sate Usus, made with chicken intestine (the intestine is cooked and then fried), an appetizer that usually accompanies bubur ayam (rice porridge), well-known street food in Indonesia.

This Indonesian dish has already won the title of the best food in the world. Beef Rendang is typical of the Minangkabau region, west of Sumatra in Indonesia. It is beef cooked for a long period with a super aromatic sauce made with coconut milk, cinnamon, cardamom, star anise, lemongrass, garlic, ginger, and galangal. Very popular throughout Indonesia, beef rendang is also well appreciated in Malaysia.

Nasi Goreng has the status of Indonesian national food (just as Pad Thai in Thailand). Nasi Goreng means fried rice, and the recipe was invented for the purpose of reusing leftover cooked rice. The dish is made with rice, soy sauce, garlic, pepper, ginger, and shallot (a kind of onion) with a fried egg on top and krupuk (an Indonesian chips that will be described below).

Nasi Campur (mixed rice) is a very popular Indonesian dish consisting of rice in the center of the plate surrounded by several “small servings” of side dishes such as fish or fried shrimps, boiled beef, egg and various types of vegetables (usually you choose the side dishes from the buffet, and they vary according to the region).

Discover even more about the famous rice dishes in the world

Ikan Goreng means fried fish. In this Indonesian dish, the fish is marinated in a paste usually containing lemon juice, chili pepper, coriander, turmeric, galangal, and shallot (the ingredients may vary according to the region of the country), and later fried in immersion. It is common to serve Ikan Goreng with rice and sambal.

Mie Goreng (fried noodle) is a street food very famous in Indonesia and similar to Nasi Goreng, but with noodles instead of rice. The dish is derived from a Chinese recipe but without pork, since the majority of the Indonesian population is Muslim. Mie Goreng can be made with sautéed fried noodles with Kecap Manis sauce, egg, bean sprout, meat (chicken, beef, shrimp, bakso), and vegetables.

Jamu is a generic term used to designate a type of drink from traditional Indonesian medicine made with natural ingredients such as seeds, fruits, roots, leaves, flowers, and tree bark. Some examples of ingredients used are turmeric and ginger (rich in antioxidants that prevent various diseases). Traditionally Jamu is consumed as a tonic in small, daily doses but the drink also serves as the basis for other preparations. 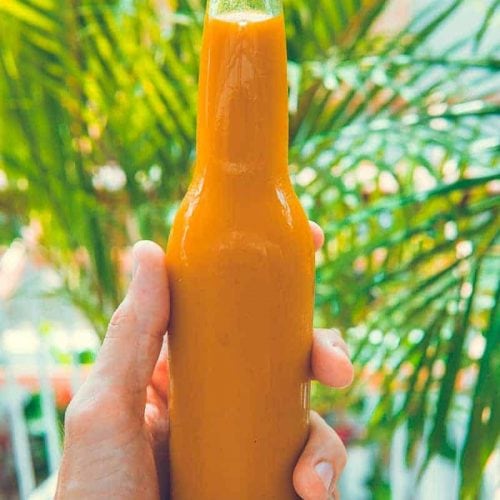 Jamu with Turmeric and Tamarind
Jamu is a traditional Indonesian medicinal drink made with herbs and spices. This classic version is made with turmeric and tamarind. Take a shot of this elixir!
Read Recipe

Kopi Joss is a cup of coffee served with a piece of hot charcoal, an exotic drink typical of Yogyakarta (Java). Kopi means coffee and Joss refers to the noise of hot coal falling on the drink. According to popular tradition, charcoal serves to neutralize the acidity of coffee, in addition to reducing impurities (attention: to take coffee it is necessary to remove the charcoal).

Bakso is a meatball made with cassava starch, egg, and pepper. Beef is usually used but can also be made with chicken, fish, or shrimp. It is served in a soup (also called Bakso) with noodles, plus other ingredients such as tofu, boiled egg, wonton (gyoza-like dumpling), and vegetables.

They are very addictive fried dumplings made with corn! Also known as corn fritters, it’s a common accompaniment in local restaurants called Warung. In addition to corn, Perkedel takes ingredients such as coriander, kaffir leaves, turmeric, and galangal.

This tropical dish consists of a curry made with banana heart (also known as banana blossom), coconut milk, kaffir lime, lemongrass, and a spice paste (shallots, garlic, turmeric, galangal,  and girl’s finger pepper). A delicious Indonesian dish that can’t be missed on your vegan menu. 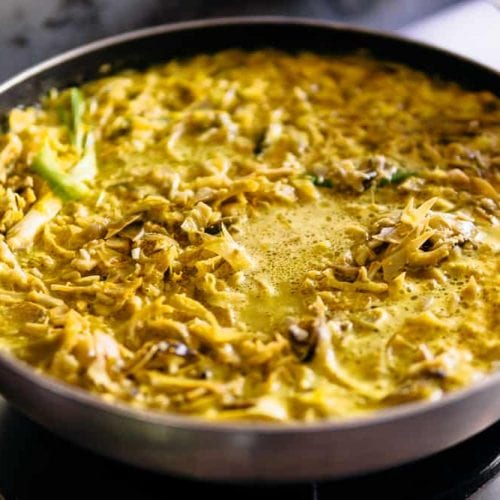 Tapai Madu is fermented cassava that tastes like honey (Madu means honey in Bahasa; Tapai is the name used for any product derived from starch fermentation). After the fermentation process, the cassava changes completely in texture (it looks like a ripe banana) and with an intriguing sour taste.

Nasi Bakar is rice cooked with various seasonings (shallot, garlic, pepper, bay leaf, and galangal) being subsequently wrapped in a banana leaf and grilled. It is also possible to use coconut rice (cooked rice with chicken broth or vegetables and coconut milk) with shredded chicken.

The banana leaf plays a very important role in the recipe because it aromatizes and elevates the flavor of rice during grilling.

Read more: Tips on how to use banana leaf for cooking

Sotos are soups, as varied as possible (light, dark, creamier, made with chicken, beef or kids). Soto Bathok is made with beef and features noodles, celery, and chives.

Usually, Soto is served with other accompaniments such as sate, tempeh, and tahu (tofu).

Soto Sayur Asem is Indonesia’s most popular vegetable soup, being a blend of flavors (spicy due to peppers, with the umami of shrimp paste, and lemongrass freshness) in a sweet broth of tamarind. The most common ingredients of the soup are corn, long bean, cabbage, chayote, leaves, and melinjo seeds (a plant native to Indonesia).

Sayur Lodeh has ingredients similar to Sayur Asem, but the broth is made with coconut milk (Sayur Asem is made with tamarind). The dish usually accompanies fish, beef or chicken, and serundeng (fried coconut flakes).

Gudeg, the most popular dish of Yogyakarta (Island of Java), has a meat appearance but is made with green jackfruit cooked slowly in coconut milk, lots of palm sugar, and spices. Although it is served as the main course, it is quite sweet. Usually, Gudeg is served with rice and side dishes such as chicken, boiled egg, krechek (fried and stewed cow skin), tofu, and tempeh.

Krupuks are fried biscuits made of starch – the same are also found in the Netherlands, called Kroepoek (Indonesia was a colony of the Netherlands for many years).

There are several types of Krupuks, most of which are made with fish or seafood (some resemble the Mandiopã from Brazil) but can also be made with fruits, vegetables, and rice. This crunchy and aromatic appetizer accompanies several popular Indonesian foods such as Cattle and Sotos.

Perkedel Kentang is a fried dumpling made of potatoes, shallots, and celery (you can also add shrimp, corn, chives, and tofu). The word Perkedel is believed to have derived from the Dutch word Frikadeller, a kind of meatball. The fried dumpling is very consumed as an appetizer but can also accompany soups.

Ayam Koteka is made with cooked rice, egg, and chicken (and served) inside a bamboo.

Ayam means chicken and Koteka is the name of the paraphernalia made of gourd, which was formerly used by the natives of New Guinea to cover the male genital (the Ayam Koteka was traditionally served in gourds, now replaced by bamboo).

Mie Jawa (Java noodle) is basically made with noodles, chicken, vegetables, and lots of spices. There are numerous variations, the most famous being the Mie Godhog Java (the noodle comes in a soup made with chicken broth), the Mie Goreng Java (fried noodle), and the Mie Nyemek Java (noodle in a thicker soup).

Traditionally Mie Jawa is made on a clay stove (the wok sits on top of a clay pot that has charcoal inside), which gives a smoked aroma to the dish.