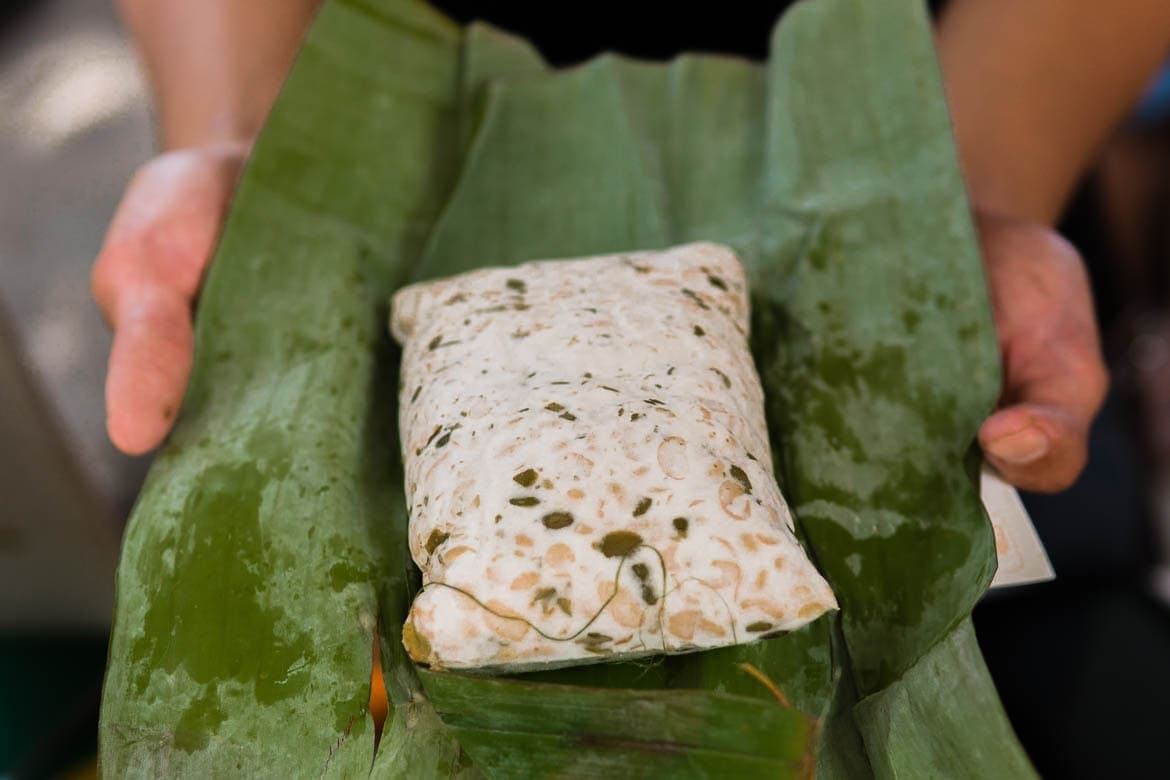 More present each day on vegetarian menus around the world, the history of Tempeh, a fermented soy product, goes far beyond a gastronomic trend.

In fact, Tempeh is a typical ingredient from Indonesia, originating in Java, one of the main islands in the country. And it was there, in the city of Yogyakarta, that we had the opportunity to learn how Tempeh is produced.

During our stay in the city we met, through the local Slow Food community, Atris Suyantohadi and Nurhayati Nirmalasari, owners of Attempe, a company focused on producing tempe from soybeans that are locally grown and non-GMO. On this visit, we had the immense experience of learning how tempeh is made and understanding the importance of this ingredient so present in the daily life of the country.

Tempeh (or tempe) is a food traditionally made by fermenting soybeans into banana leaves and has a flavour that (for us) resembles nuts and mushrooms. Like many foods throughout history, Tempeh was discovered by accident (they say it was through the unexpected fermentation of soy discarded in the tofu production process).

The soy fermentation process is carried out by the fungus called Rhizopus oligosporus. This process causes the grains to bond, which makes Tempeh look like a “white cake”, in addition to making it rich in probiotics.

This item so used in many typical Indonesian dishes has gained worldwide fame for being rich in vitamins and proteins. In addition to being very versatile, tempe is also a good option for vegetarians and vegans and can be prepared and served in various ways as a main dish, salads, in broths or even as a filling in sandwiches.

How Tempeh is produced – Step by step

First, the soybeans are boiled in water to remove the husk. Then, the soybean goes through a pre-fermentation process that lasts a day at room temperature (approx. 25 °C) to decrease the pH. This initial process favours the growth of fungi and inhibits unwanted bacteria. Although this is the most traditional method, many producers currently skip this step with the addition of vinegar or lactic acid.

Then, the culture of Rhizopus oligosporus is added, the grains are packed in banana leaves, a traditional method which also gives a special flavour and aroma to the Tempe, or in polyethylene bags, and stored at a controlled temperature (approx. 30 ° C) for one or two days for soy fermentation.

How Tempe is consumed in Indonesia

This secular food is eaten in many ways in Indonesia, check out some examples of recipes with Tempe:

In this dish, Tempe is fried in a sauce called Kecap Manis, which consists of a sweet soy sauce made with pepper, onion, garlic, tamarind juice and Kaffir lime leaves, a tree native to Indonesia.

In Sambal Tempe, the tempe is broken into small pieces and sautéed in a sauce called sambal (traditionally the sauce is made by kneading red peppers, shallots, tomatoes and garlic with a pestle). It is a very practical recipe in Indonesia since all ingredients are readily available in the country.

First, the tempeh is deep-fried until golden. Then, it is sautéed in a sauce made with grated ginger, garlic, onion, soy sauce and tamarind juice. The dish is usually served with rice and sambal.

In Javanese, Bacem means “marinate”. In this recipe, the tempe is cut into large pieces and cooked with a sautéed paste (the paste is made with shallots, garlic and coriander seeds mashed with a pestle), bay leaves, ginger, water and coconut water, all being cooked until the liquids evaporate. After that, the marinated tempe pieces are immersed until golden brown.

Known as Indonesian curry, Gulai is a sauce made with coconut milk, kaffir lime, lemongrass and a spice paste that contains shallots, garlic, turmeric, galangal, candlenuts and chilli pepper. There are several types of Gulai, Gulai Jantung Pisang, made with banana flower, Gulai Ayam (chicken) and Gulai Tempe, made with Tempe cut into cubes.

How to cook with Tempe – Preparation ideas

Tempeh is super versatile, making it possible to prepare it in several ways:

It can be cut in different ways for these preparations – in cubes as an appetizer, in strips (often used in salads replacing croutons), in slices serving as a sandwich filling and even grated, being a vegetarian option to stuff tacos.

Tempeh can absorb spices very well, so a tip is to marinate it before frying, roasting or grilling to make it even more flavorful. Some examples of ingredients for marinating are soy sauce, vinegar, coconut water, coconut milk, spices, honey and peanut sauce (made with peanut butter, peppers and sesame oil).

In stews and sauces

Tempeh is also great for pasta sauces, curry, chilli or stews. It can be cut into cubes or broken into pieces and added in natura directly to the sauce or previously fried.