Skip to content
With its authentic flavor, this Brazilian shrimp and fish (Moqueca Baiana) is an ideal dish to serve in a full meal, celebrating all the richness of the Brazilian gastronomic culture.
Jump to Recipe

Moqueca is a Brazilian dish originating from the culinary legacies of Indigenous, European, and African cooking. The native Brazilian had a dish called pokeka, a slow-cooked fish wrapped in a leaf. The cooking method used was known as moquém.

With the Portuguese colonization, the European tradition of stews reached Brazil. Soon, there was a mixture between native and European cooking styles, and the tropical fish were added to the stews, giving rise to moqueca.

In the Bahia region, the African immigrants added their ingredients and preparation methods to the dish. Thus, the Bahian moqueca was created, which takes Brazilian palm oil and coconut milk in addition to fish and seafood.

If you are looking for a milder version, don’t miss the Moqueca Capixaba Style Recipe.

To learn more, we talk about the history of moqueca in Brazil and the main types.

Fish is the great protagonist of Bahian moqueca. It is essential to choose a fish with firm consistency for this recipe, which does not fall apart during cooking. In Brazil, the most suitable fish for making moqueca are: cação, robalo, badejo, pintado, dourado, namorado, filhote, dentão, papaterra, and garoupa.

Another important ingredient in this moqueca recipe is the shrimp. Being a type of seafood that requires more delicate cooking, it is essential to add the shrimp at the end of the preparation.

Palm oil is one of the main African heritages in the preparation of Bahian-style moqueca. Also known as red palm oil, this ingredient is responsible for the reddish color of the moqueca sauce and for its slightly sweet flavor. It might not be easy to find abroad but you can order it online.

A product of African influence, coconut milk is an essential ingredient in the preparation of Bahian moqueca, bringing creaminess to the dish. Give preference to the homemade coconut milk, which preserves all the fruit’s flavor.

Tips for making a delicious Shrimp and Fish Moqueca

How to make homemade coconut milk

Coconut milk can be prepared at home. To do so, you should beat dried coconut pieces in a blender with hot water for approx. 4 minutes. Then strain the milk through a fine sieve or cotton cloth.

Marinate the fish before

To ensure the fish used in the moqueca incorporates the seasonings, it is essential to marinate it first. In this step, beat the seasoning ingredients in a food processor or blender until they form a paste. Then add this marinade to the fish cuts, cover with plastic wrap, and place in the refrigerator for at least 30 minutes.

What is the ideal pan for the Bahia-style moqueca?

Although you can make the moqueca recipe in aluminum or iron pots, the clay pot is the best. This material allows for uniform cooking of the ingredients and perfectly harmonizes the spices with the flavor of the fish and seafood. In addition, the clay pot maintains the heat for longer, keeping the dish warm throughout the meal.

Whatch out the shrimp cooking point

The shrimp require less cooking time and should therefore be added at the end of the moqueca preparation. It prevents the shrimp from becoming hard.

There are many ways to adapt the preparation of moqueca, adding new flavors or adjusting for dietary restrictions:

Recipe: How to make Brazilian Moqueca 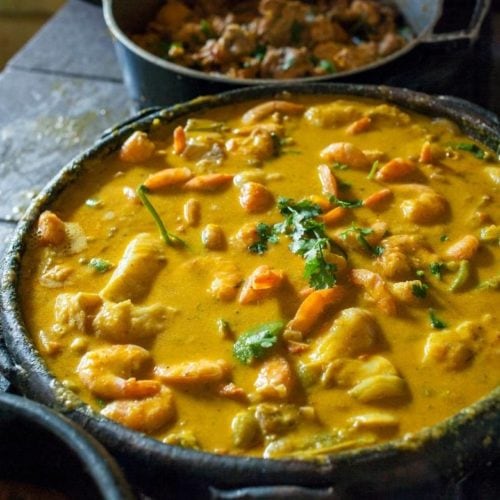