Brazil has a vast diversity of biomes and climates, in addition to the influence of various cultures such as indigenous, African, and European. This geographical and cultural richness is reflected in the variety of typical foods that exist in the country – from A of Acarajé to X of Xerém de Galinha.

With all this diversity, many traditional Brazilian dishes make the most of local ingredients. An interesting point is that several Brazilian recipes, now considered delicacies, were created to avoid wasting ingredients or are adaptations of dishes brought by immigrants, but made with regional ingredients (which often made the dish even better than the original!).

From North to South: 15 typical dishes of Brazilian gastronomy

The classic duo “rice and beans” and products derived from cassava cover a large part of the food base in the country, but traditional Brazilian food goes much further…

Check out some examples in this list with the main typical dishes of each region of Brazil.

Wednesday and Saturday are consecrated Feijoada days for Brazilians! Its origin is still much discussed, but it is assumed that the dish is an adaptation of Portuguese Stew, since this type of recipe was quite common in Europe (like Puchero in Spain and Cassoulet in France).

The moqueca fish stew is one of the most well-known dishes in Brazil, its origin is still the subject of much dispute between Bahia and Espírito Santo states. The most common recipes use local fish and crustaceans, such as shrimp, crabs and lobster, and are traditionally made in clay pots.

The moqueca baiana is made with bell peppers, coconut milk, and palm oil (dendê), while the moqueca capixaba, from Espírito Santo state, uses annatto oil (which gives a reddish color) rather than dendê, in addition to being less spicy.

A must-do program if you go to Salvador is to eat Acarajé. The dish has an African origin, the word Acarajé originates from the Iorubá language: Àkàrà means fireball and Je means to eat. It’s a dumpling made with black-eyed beans, fried in palm oil, and stuffed with shrimp, vatapá (a creamy paste made with dry shrimp, coconut milk, peanuts, and palm oil), caruru (okra stew that also takes shrimp), and pepper sauce. This delicacy is typically sold by the ‘Baianas of Acarajé’, dressed in traditional clothing.

Curiosity: The Office of the Baianas of Acarajé was recognized as National Heritage and inscribed in the Book of Knowledge in 2005 by the National Historical and Artistic Heritage Institute (IPHAN).

Pato no Tucupi is a typical dish from Pará (a state in northern Brazil) and takes duck meat (pato) with regional ingredients such as tucupi (yellow broth extracted from the root of manioc, a technique of indigenous wisdom) and jambu leaf, which causes a slight numbness in the mouth when consumed. A Pará tradition is to eat Pato no Tucupi on the day of Círio de Nazaré, a religious festival that takes place in the city of Belém in October.

Tacacá is a traditional dish from the Amazon region and is a popular street-food in the states of Pará and Amazonas. The delicacy is also made with tucupi and jambu, with the addition of dried prawns, chicory, hydrated tapioca gum (in Tupi Guarani language tacacá means gum), as well as various spices such as sweet pepper, garlic, parsley, and green onions. Even on hot days, this full-bodied broth is consumed very hot.

Originating in Ceará, one of the most famous northeastern dishes in Brazil is Baião de Dois, an unbeatable combination of rice and beans, which can be green, black-eyed, or cowpea. In the recipe, rice is prepared in the already cooked bean broth, being a great way to use leftover beans. The ingredients can vary according to the region, the most common being bacon, dried meat, coalho cheese, cilantro, and chives.

Rice with Pequi is a traditional dish from Goiás cuisine, where the main ingredient is Pequi, a fruit with yellowish flesh and very aromatic native to the cerrado. In this recipe, the fruit can be used in flakes or whole – care must be taken with the thorns present in its core (in Tupi Guarani Pequi means prickly skin).

This dish originated in the Rio Grande do Sul and its name means ‘carter’s rice’ because the recipe was made by carters who took along their journeys rice, jerky, onion, salt, and of course, the iron pan. Currently, the Arroz a Carreteiro can also be made with ground meat and barbecue leftovers, being a great way to avoid waste.

The rice dishes don’t stop here! Check out our list of the most famous rice dishes in the world.

Like the Arroz a Carreteiro, Feijão Tropeiro (Tropeiro Beans) was also a dish of “nomads”, since it was consumed by muleteers during the 18th and 20th centuries, called Tropeiros. The main ingredients of the Tropeiro Beans recipe are beans, dried meat (jerky), bacon, manioc flour or corn, and salt, all easy ingredients to be taken by travelers during their long journeys. Tropeiro beans are very popular in the states of São Paulo, Minas Gerais and Goiás.

Paçoca de Carne Seca has an indigenous influence from the making of paçoca by punching manioc flour in a pestle (in Tupi Guarani the word means “crumble”). The tropeiros also helped to spread the consumption of paçoca, after all, the preparation did not spoil during the long trips. The basic ingredients are cassava flour and dried meat plus the extras, which vary according to the region. Examples are coriander and Manteiga de garrafa (local type of clarified butter) in the northeast and pine nuts in the south.

Barreado is a traditional dish from the coast of Paraná (cities of Morretes, Antonina, and Paranaguá) made with beef, bacon, onion, garlic, and various spices such as bay leaf, parsley, green onion, cumin, and black pepper. The name comes from the expression ‘barrear the pan’ which means to seal the clay pot with manioc flour to prevent steam from escaping through the lid. The meat is cooked for several hours over low heat, which makes it extremely tender and with a full-bodied broth. The barreado is served with rice, manioc flour, and banana (fried or raw).

The galinhada, typical food of Minas Gerais and Goiás, is a heritage from the time of the Bandeirantes in the 17th century. This traditional and comforting dish consists of rice and chicken. In the Minas Gerais version, it takes pieces of chicken, bell peppers, parsley, and green onions, while the Goiás version is made with cuts of chicken (thighs and drumsticks), pequi and guariroba, a type of palm heart.

Frango ao molho pardo, which means chicken in brown sauce, is one of the most famous foods of Minas Gerais gastronomy, a famous Portuguese dish taken to Brazil and adapted by the colonizers (in Portugal it is called Galinha à Cabidela). In the delicacy, the chicken is sautéed and then covered with a brown sauce, made with chicken blood (nowadays, some people use red wine), vinegar, tomatoes, and peppers.

Virado à Paulista is traditionally served on Mondays and is declared an intangible heritage in the state of São Paulo. The relevance of the dish dates back to the 17th century, serving as food for the Bandeirantes during their expeditions. The recipe was a combination of beans, dried meat, bacon, and manioca or masa flour, currently accompanied by rice, pork chop, collard greens, fried plantains, and a fried egg. Virado à Paulista is similar to Tutu from Minas Gerais, but tutu is made with ground beans while Virado is made with whole grains.

This dish, which means ‘shrimp in the pumpkin’, was invented in the city of Ubatuba, located on the coast of São Paulo. It consists of a creamy prawns stew that is served in a large roasted pumpkin (without the seeds). 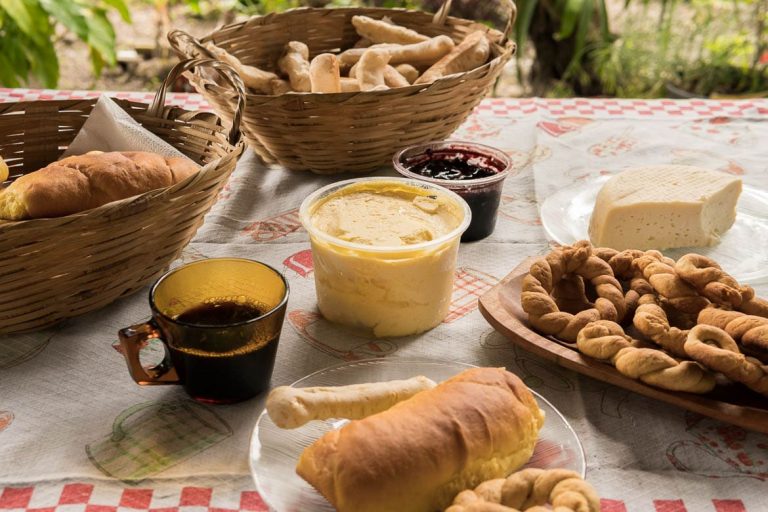