Skip to content
Moqueca Capixaba-Style is a recipe that reflects the plurality of the Brazilian people, combining Indigenous and European techniques and ingredients in a dish with an authentic national flavor.
Jump to Recipe

The Brazilian Moqueca Capixaba-Style is a dish with indigenous and Portuguese influences that reflects the foundations of the Brazilian gastronomic culture. Combining national ingredients and a preparation method that preserves all the flavors, this recipe is perfect for a typically Brazilian lunch.

Moqueca Capixaba is a fish and vegetable stew seasoned with olive oil, annatto, and cilantro originally from the state of Espirito Santo in Brazil. Actually, the term Capixaba is related to everything that originates in the state.

Unlike the Bahian version of Moqueca, which is most famous abroad, Moqueca Capixaba-style is prepared without dendê (palm oil) and coconut milk. The result is a milder flavored dish whose protagonist is the fish.

To learn more about the different types of moqueca, check out our article about the history and types of Moquecas from Brazil.

The origin of Moqueca Capixaba is related to the early days of Brazilian gastronomy. The native indigenous people prepared a dish with fish called pokeka. In this recipe, pieces of fish were cooked wrapped in leaves in a primitive oven known as moquém. It was also an indigenous custom to use urucum in recipes.

With the Portuguese arrival, many of Portugal’s culinary traditions were mixed with the indigenous ways of preparing food. For example, the Europeans cooked vegetable-based stews and often used olive oil in their recipes. Thus, a fusion of these culinary legacies took place, and moqueca was created with Portuguese and indigenous elements.

Today, Moqueca Capixaba is a gastronomic heritage celebrated by the inhabitants of the state of Espírito Santo. It is officially recognized as an Intangible Cultural Heritage of the city of Vitória and one of the typical foods of the state. There is even an official date to celebrate the dish, September 30.

Fish is the main ingredient of the traditional Moqueca Capixaba, and its correct choice is essential for the dish’s success. In this recipe, the fish must have a firm consistency to avoid falling apart during cooking.

The most suitable fish for the preparation of Moqueca Capixaba is white firm fish, like bass, grouper, haddock, catfish, cod, and snapper. Typical cuts are in steaks or big chunks.

Olive oil is one of the Portuguese heritages in the preparation of Moqueca Capixaba. Taken to Brazil during the colonization period, this ingredient, produced from olives, brings softness to the moqueca’s flavor.

The reddish color of the Moqueca Capixaba is produced by the annatto seeds, known in Portuguese as urucum and achiote in Spanish,  a fruit native to America and widely used by indigenous people.

The annatto oil is used to prepare the traditional moqueca and can be easily made at home. However, it is also possible to find annatto seed in powder for those who want to simplify the recipe.

If you can’t find annatto, you could substitute it with something that acts like a colorant, like saffron or a mix of turmeric and paprika. However, keep in mind that annatto has a very mild flavor, be careful with the replacement.

Tips for a traditional Moqueca Capixaba

How to make annatto oil

If you want to make the urucum oil at home, take about 250 grams of annatto seeds to a low fire in 0.5 liters of oil or olive oil, constantly stirring to mix. If you want to change the amount, keep the proportion 1g of annatto to 2ml of oil. When the mixture boils, the oil will take on a reddish hue, and the seeds will turn black. At this point, remove the seeds, let them cool, and strain the oil. This oil should be stored in a closed glass, in a dry and well-ventilated place.

How to marinate the fish

For the fish to absorb all the seasoning’s flavor, it is essential to marinate it before preparing the moqueca. In this process, the seasonings are beaten in a blender or food processor until they form a paste. The fish cuts must be covered with this mixture and put in the fridge for at least 30 minutes before starting the recipe.

The best pan for Moqueca Capixaba-Style

The Moqueca Capixaba can be prepared in several types of pots, such as aluminum and iron. However, to ensure the quality of the dish, the recommended type is a clay pot. This material allows for uniform cooking of the fish and perfect incorporation of the seasonings. Moreover, the clay pot keeps the dish warm throughout the meal, as the moqueca is served directly on it.

There are several possible variations of Moqueca Capixaba, either to diversify the dish or to adapt it to different palates or dietary restrictions:

Best side dishes for Moqueca Capixaba

Moqueca capixaba is traditionally served with white rice, farofa, and pirão (manioc flour thickened fish broth). When preparing the pirão, you can use the parts of the fish not used in the moqueca, such as the head and tail. What about a fruit juice, caipirinha, or dry white wine to go with it?

Check out the recipe and learn how to make Fish Moqueca 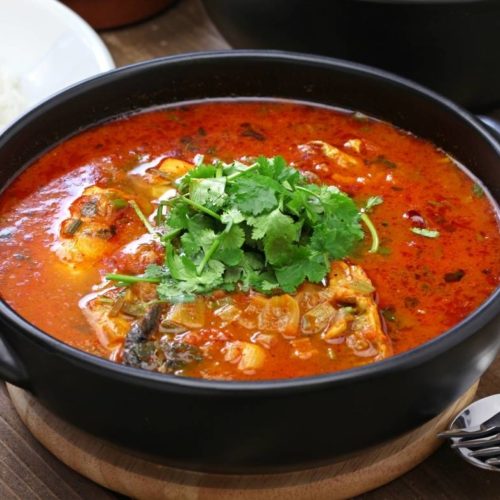 Clay Pot
Tried this recipe? Share with us!Mention @foodandroad_ or tag #foodandroad!
We use cookies on our website to give you the most relevant experience by remembering your preferences and repeat visits. By clicking “Accept All”, you consent to the use of ALL the cookies. However, you may visit "Cookie Settings" to provide a controlled consent.
Cookie SettingsAccept All
Manage consent