Skip to content
Perfect drink for a meeting with friends. Learn how to make a refreshing spanish sangria with red wine and fresh fruit.
Jump to Recipe

Sangria is one of those versatile, delicious and dangerous drinks. After all, it is so easy to drink that we even forget that it is an alcoholic beverage. It is a cocktail made with red wine flavoured with fruit and fortified with a dose of distillate. Although Sangria brings red wine, the end result is surprisingly refreshing.

Now, the most surprising thing is not its freshness, but its fame. Sangria is one of the most famous Spanish drinks, but on a daily basis, Spaniards do not consume it as often as we think, so Sangria ends up being a drink most requested by tourists. In general, Spanish locals prefer other beverages to keep cool – such as red summer or a simple dose of vermouth.

So typical that it is protected by law

Regardless of local consumption, Sangría is a drink known to have originated not only in Spain but also in Portugal. By the way, there is a European Union law stating that, commercially, a drink can only be called Sangria if it is produced in Spain or Portugal.

The components of a good Sangria and its possible variations:

There is no single way to prepare a traditional red wine Sangria recipe, but it is important that the final recipe considers the following elements:

Sangria is made with red wine, fruits and a dose of dry distillate, such as cognac, rum, vermouth, etc. The Tinto de Verano, which is translated to red summer, is simpler, does not take a distilled drink and not so many fruits, only orange peel and lemon.

How to drink sangria

Sangria is a wine cocktail made to be shared and consumed in social moments. The recipe yields a lot, which makes it the perfect drink for a party accompanied by Spanish tapas, appetizers, and good friends. 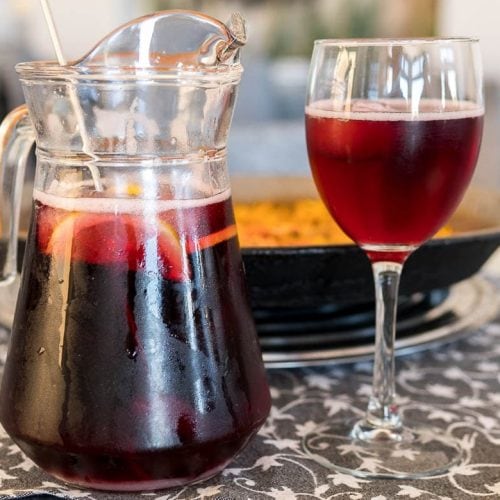