No matter how much you try the typical dishes of a country, is always better to be inside the kitchen to truly understand the nuances of its flavours. We are big fans of Hyderabadi Biryani and Indian food in general, so while in India, we got in contact with Brand CAI-India’s Culinary Academy in Hyderabad and got accepted for a full week of training on Indian cuisine. Yes, we got it!

The whole course was a delicious journey into Indian cuisine carefully prepared and organized by Brand CAI team. During one week we were presented to dishes from different regions of India. We learned eight dishes per day for six days, it is a lot of learning.

Every day was a unique experience, however, the last day of the course was the most awaited not just for us, but for the entire school. On that day, we cooked the full recipe of a Hyderabadi Biryani with Chef Prateev, responsible for regional dishes and Indian barbecue.

When the day arrived, our kitchen was crowded full of spectators and curiosity! Students, chefs, instructors, all passing by to check it out how the cooking was going. The dish was prepared in large portions and served for all the people there at lunchtime. The little leftover went to the lunchbox for after hours, of course.

What is so special about the Hyderabadi Biryani?

The Hyderabadi Biryani is famous throughout the country. Originally, it is prepared with mutton, but the version with chicken is very popular. That is the one we learned how to cook.

The different methods to prepare the Biryani are called Kacchi, Pakki, and Dum. If you want to know more about the difference between the preparation methods, read this post.

In Hyderabad, we used the Kachhi Dum method to prepare a Dum Biryani. Kacchi means cooking raw marinated meat together with rice and Dum represents the method of sealing the pan (called ‘ Handi ‘ – well known for this preparation) with dough made out of flour and water to retain the steam thus helping to cook.

The basis of a good Biryani, the marinade

It all starts with the marinade! Usually, the meat is marinated the day before, but to make it possible for us to learn all stages, we started the marinade very early on the same day. If the meat is from lamb, they use papaya paste as a softener! For that, you remove the seeds and blend the papaya with everything including the skin, and just add in the marinade.

The papaya contains an enzyme called papain which helps to break the proteins of the meat. Ideally, you may use green papaya because it contains more papain.

Our marinade was made in three steps with an interval of more or less 30 minutes between each.

The water that cooks the rice, the secret flavour

If you think the use of spices ended here…you’re mistaken. The method of cooking rice is another art of this Hyderabadi Biryani. When we asked what would go in the cooking water, the Chef just gave us a slight smile and put himself to organize the next alchemy of fragrances and aromas.

That’s how we started to prepare the water to cook the rice. We gathered poppy root, betel root, cardamom, black cardamom, coriander seeds, rose petals and black cumin. We put all these ingredients in a piece of cheesecloth, tied it up, and immersed it in the most flavoured water I’ve ever cooked rice in my entire life.

Layered preparation is one of the main features of the Biryani

One of the main features of this dish is to prepare it in layers. The first layer of the pan is the marinated meat, then comes the first layer of rice. The important detail is that the rice is pre-cooked in three stages. After each step, it is drained and placed in the pan above the previous layer.

To cook the rice in three stages means that:

After placing all the rice in the pan, the final step begins. Firstly, you add a beautiful amount of ghee, followed by chopped fried onion, coriander, mint, and oil with saffron infusion – one of the highlights of Hyderabadi Biryani. This infusion will penetrate through the layers and give the rice grains a yellow gold colour, literally an art-piece for the hungry eyesights of food enthusiasts like us!

In Short, the layers are:

Before start cooking, you need to implement the Dum technique, which means to seal the pan with a dough of flour and water to retain steam and cook at low heat. In our case, we cooked with three stages of temperatures. As you may have already noticed, number three is the number of the day!

The first stage is to cook on high heat for 10 minutes, then 20 minutes on low heat and lastly, wait 15 minutes with the fire off. After that, carefully remove the cover due to the pressure and hot steam retained inside. Finally, the best Biryani we have ever eaten in our life is ready to be savoured!

Side Dishes for the Hyderabadi Biryani

We have made two traditional recipes as side dishes for the Biryani. The Mirchi Ka Salan – a sauce of green chilli and peanuts, and the Dahi Ka Raita – a chutney of green chilli, coriander, and onion. Both traditional of Hyderabad and old companions of Biryani.

Have you ever imagined that you need so many steps to prepare a Biryani?

Learn more about the history of Biryani along its regional features and variations. 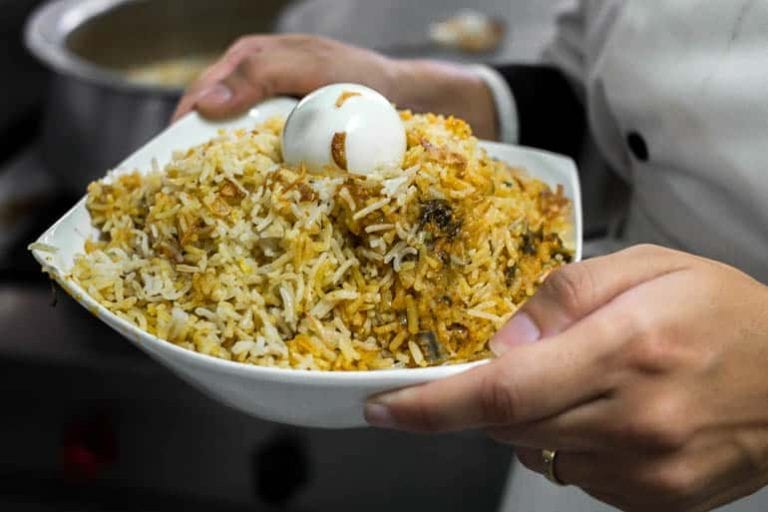