Tom Kha Gai is one of the most popular dishes in Thailand around the world. No wonder, this Thai chicken soup is one of those easiest dishes to prepare, with a combination of simple and authentic ingredients that you can feel the flavor of Thailand with every spoonful.

In Thai, Gai means chicken and Tom Kha refers to the creamy, slightly citrusy broth made with coconut milk and flavoured with galangal, kaffir lime leaves and other ingredients. An explosion of flavours and aromas.

Read more: A complete list with the most famous soups in different countries around the world

Although the list is not very extensive, some of the ingredients for making Tom Kha Gai can be difficult to find outside of Southeast Asia.

In this Tom Kha Gai recipe, we include all the details of the original recipe and also adaptations so that you can replicate the dish from anywhere in the world.

The preparation of Tom Kha Gai is very easy, in less than 20 min you will have a bowl of super aromatic chicken soup to taste. But it is worth some tips:

Coconut milk is a super delicate ingredient and needs a little attention to avoid separating the solids when going to the pan. The important thing is to keep the heat medium-low and stir very gently.

The recipe’s aromatic items such as galangal, kaffir lime leaves and lemongrass are essential to flavour the broth, but they are hard and should not be consumed. Therefore, they are added to the pan in large pieces so you can remove them before serving or leave them at the bottom of the soup bowl. Don’t chew them.

Variations in the Tom Kha preparation

How to serve Tom Kha Gai like a Thai

In Thailand, Tom Kha Gai is eaten with a bowl of jasmine rice aside. Put some of the soup on top of the rice, like a curry. 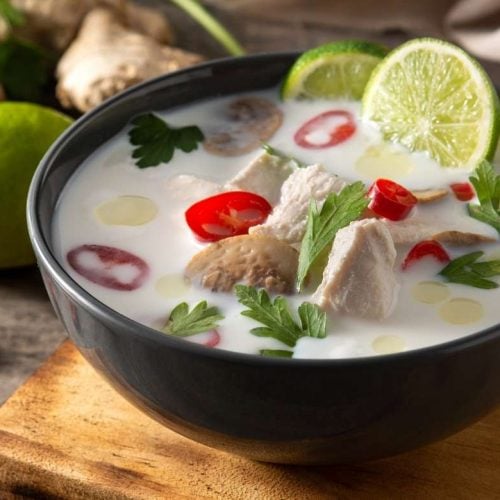