Skip to content
The potato tortilla is one of the most classic Spanish recipes. Made with simple ingredients: potatoes, eggs, onion and olive oil. The recipe is easy, but there are some tricks for the perfect tortilla de patatas.
Jump to Recipe

Do you know those dishes that taste like comfort and are trivial in a country’s cuisine? In Spain, that dish is potato tortilla. Loved and consumed from north to south of the country, this Spanish omelette is a classic dish made with simple ingredients – eggs, potatoes and onions.

The Spanish tortilla is almost a potato pie with eggs. Although the recipe is simple, the preparation is different from a potato omelette or frittata, there are some techniques and tricks to make an authentic tortilla.

But, before step by step, we need to discuss a very important aspect of the dish.

Tortilla de patatas with onion or without onion?

In Spain, there is a heated debate as to whether the original tortilla recipe takes onions or not. During our trip around the country, we asked many people and the answer was usually related to the way their grandmother made it. In other words, it depends on the memories, regional traditions and the preference of each one.

Of course, our tortilla recipe takes onions, after all here at Food’n Road, we love an extra layer of flavor.

Very well, the conversation about the tortilla is so serious that each person has an ideal point for the favorite tortilla. Some like the rare potato tortilla, the eggs are almost raw inside and run down the cut. Others prefer it medium well, the egg does not get to drain but it is still very creamy. The well-done tortilla is ideal for preparing the famous tapas and pintxos.

The Spanish tortilla recipe takes few ingredients, so it is very important that the ingredients have quality. The potatoes cannot be too soft, prefer fresh eggs and olive oil with a neutral flavor so that it does not stand out in the preparation.

Potatoes need to be cooked in oil and not in water

There is no discussion, to make tortilla like a Spaniard the potatoes need to be ‘pochadas’ in olive oil for about 15-20 min at medium-low temperature. Don’t be shy with olive oil! The recipe takes enough to cover all the potatoes in a deep frying pan.

I know, that amount of oil seems absurd, but it makes all the difference in the taste of the tortilla. No need to worry, you can reuse all the olive oil after preparation.

Prepare the potatoes and onions in separate pots.

The preparation time for potatoes and onions is different, so the advice is to prepare the onion in another pan while the potatoes are being cooked in olive oil. Onions need to almost caramelize, the right point is to remove them a little before they start to brown.

The mixture of potatoes, onions and eggs needs to rest before going to the skillet.

Unlike an ordinary omelette that you can mix everything right in the pan, one of the secrets of the tortilla is to mix the beaten eggs with the cooked potatoes and onions in a bowl. So, it is necessary to let this mixture rest a little before the final preparation of the tortilla. This step makes the flavours mix and the eggs start to cook, which makes it easier to turn the tortilla over.

The right skillet or frying pan for tortilla

Before we talk about the most important and feared part of the tortilla: the turning over. It is worth remembering that one of the essential items for your tortilla to be a success is to prepare it in a pan of the right size, that is non-stick and has high edges.

Don’t be afraid of turning it over!

The tortilla mixture goes to the pan when the oil is already very hot. This first contact with heat is very important to form a crust and seal the tortilla.

When the crust on one side is formed, cover the pan with a flat plate or lid and flip – you need to make a quick and confident movement to turn the tortilla on the other side before returning it to the pan.

Variations for your tortilla:

Of course, with all due respect to the recipe and authenticity of the original tortilla, you can use your creativity to explore different versions of the tortilla, for example:

How to serve potato tortilla as in Spain

Spanish tortillas are very versatile. In Spain, it is served for breakfast, as a main dish for lunch, as a sandwich filling and as tapas for dinner. It is best served at room temperature or even cold, a great recipe to prepare in advance. 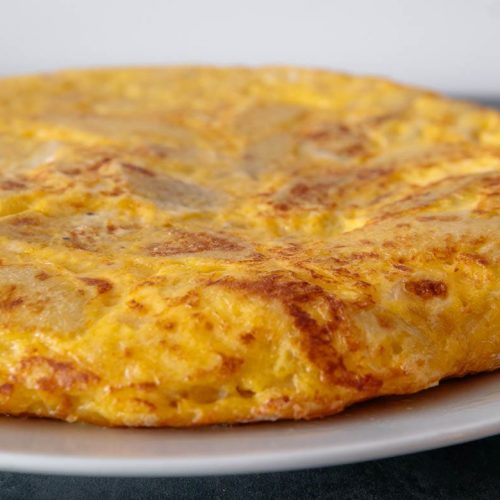 5 from 1 vote
The potato tortilla is one of the most classic Spanish recipes. Made with simple ingredients: potatoes, eggs, onion and olive oil. The recipe is easy, but there are some tricks for the perfect tortilla de patatas.
Print Recipe
Prep Time 10 mins
Cook Time 40 mins
Resting Time 10 mins
Total Time 1 hr
Servings 4 people

Try serving a portion of montadillos or pintxos de tortilla with jamón.