The city of Chiang Mai located in the north of Thailand is famous for its numerous Buddhist temples, mainly in the region known as Old Town, where temples built between the 13th and 18th-century accommodates monks of all ages and offer Meditation courses and other programs related to Buddhism. It was in one of these temples that we had the opportunity to participate in the program Monk Chat, a free session where people can talk to monks, learn more about Buddhism and exchange experiences. During the Monk Chat, we tried to understand the relationship between Buddhism and food.

First of all, what is Buddhism?

Buddhism can be defined as a philosophy of life that is based on the experience and teachings of Siddhartha Gautama, the Buddha. Born in the 6th century BC In Kapilavastu in northern India, Siddhartha Gautama came to die at the age of 80 and left a range of teachings. These teachings have as precepts to do good, to avoid evil, and to purify the mind through research, understanding, and self-knowledge.

Three main schools were formed based on Buddha’ teachings: Theravada, Mahayana, and Vajrayana. The Theravada school established itself with greater dominance in Thailand, Laos, Cambodia, and Myanmar while Mahayana and Vajrayana spread through Tibet, northern India, Mongolia, China, Korea, and Japan. This text is based on the Theravada school as a result of our conversations with monks in Thailand.

And what is the purpose of Buddhist practice? Is it to seek happiness?

Correct, but for the Buddhist monks, happiness is not related to the things that nourish our desires, but rather to the causes that create suffering. In Buddhist philosophy, it is important to balance body and mind, to get rid of all the causes that generate suffering, and thus achieve the liberation known as the state of Nirvana. In other words, you can achieve happiness by eliminating the causes of suffering, not by feeding your desires. Life in the Buddhist concept is seen as a continuous and impermanent flow of interactions and it is necessary for people to work in various obstacles, such as our submission to physical and mental desires, the greed of possessing, and above all, self-centeredness.

Many people think that Buddhism is strictly vegetarian, but this diet is more strictly followed by the Mahayana school. In Theravada school vegetarianism is not a rule, but rather a recommendation within the precept of avoiding evil, that is, to cause the death of a sentient being (beings who possess the ability to feel/sense).

And why is vegetarianism a recommendation and not a rule?

In the Theravada school, monks do not choose what they eat, they rely on donations for their food. As Buddhism seeks detachment from desires, this also includes the desire to eat. Being more specific, the feeding to these Buddhist monks is not accompanied and motivated by a desire to savour and obtain a gastronomic pleasure, but rather by a vital necessity of our body in search of a balanced life. For this reason, monks do not cook their own meals and do not choose what they eat.

In this context, food goes beyond feeding and it is also seen as an instrument of connection between the monks and the local community. Every morning monks walk through the streets to receive food donated by lay people, Buddhism practitioners, this routine is called Round of Alms. After that, they return to the temple to share the meal between themselves. In the monastic life, it is not allowed to accumulate food and the act of eating is a shared practice, which ensures that all monks benefit from the food collected in that day and contemplate the meal.

The desire to eat

The fact that monks do not attach themselves to the desires of taste, it does not mean they don’t like a specific food. Otherwise, they would be ignoring their awareness between the senses and the mind. What I mean is that even with the sense of taste, they do not choose what they eat, accept all that is offered, and share the food between themselves, temple staffs, and people in need. Despite the flexibility of eating meat, there are exceptions to the type of animal that can be consumed, it is not allowed to eat elephant meat, snake, tiger, dog, bear, snake, horse, and human. It is important to mention that if they know that some animal was killed specifically to feed them, the food should be refused.

The practice of fasting

Fasting is also part of monastic life. The monks only make two meals a day, one in the morning and another before noon. After the second meal, they do not eat solids and spend the rest of the day only with liquids while studying, practising meditation, and other activities related to the temple, community, and self-development.

In summary, in the school of Theravada Buddhism, practised mainly in Thailand, Laos, Burma and Cambodia, the monks relate to food without attachment, and avoid the desire for the taste to seek only vitality and balance. With the round of alms, food plays a role of a connection between the monks and the community. For the monks, the food donation supplies their physical needs and allow them to move forward with their duties and Buddhist practices. On the other side, the laypeople exercise their community roles, with good deeds they evolve in their practice and receive gratitude from the monks.

Check out excerpts from our interviews with some of the monks we talked in the Monk Chat program and see what they have to say about the relationship between Buddhism and food.

If you are interested in the Monk Chat program in Chiang Mai, we participated in two temples: Wat Chedi Luang and Wat Suan Dok. 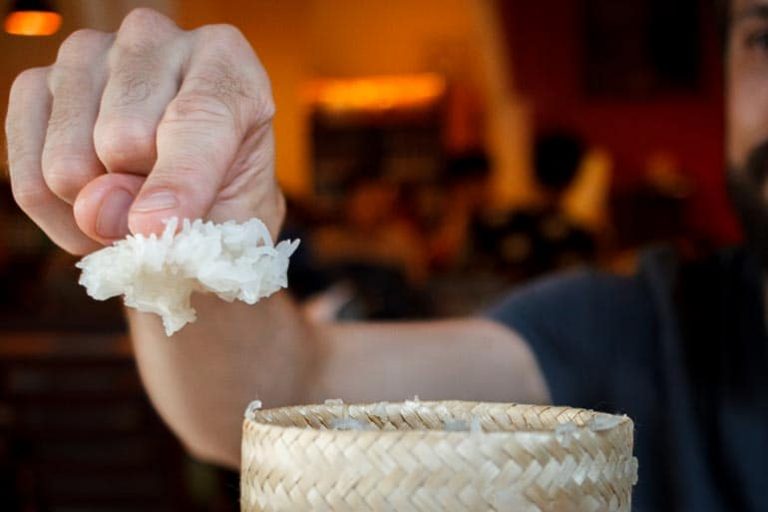