Skip to content
Roasted chicken pieces cooked in a delicious buttered tomato sauce with a lot of spices. This Indian curry recipe is a true explosion of flavour.
Jump to Recipe

The History Behind Murgh Makhani, a.k.a Butter Chicken Masala

“How about we create a new recipe using this chicken tikka that was roasted in Tandoor? We can make a gravy based on spices and tomatoes, add enough ghee to make it really creamy and cook the chicken pieces there! What do you think?” I imagine it must have been more or less like this the conversation between the members of the Punjabi food restaurant Moti Mahal, in the late 1950s. Little did they know that this recipe, created in their restaurant, would become one of the most famous dishes in India, Murgh Makhani.

We learned this recipe during our Indian cooking course at the Culinary Academy of India (Brand Cai) and despite the long list of spices, it’s a very easy Indian chicken recipe. We included all the steps to make an authentic Butter Chicken Masala recipe that is creamy just like Indian restaurants. Also, we will also explain some shortcuts in case you want to make adaptations.

How to make Butter Chicken Masala: All the steps explained

I have a surprise to tell you. You will not learn ONE Indian recipe, you will learn TWO Indian recipes! To make this Chicken Butter Masala recipe the steps are:

The original recipe is made with chicken roasted in the Tandoor oven that reaches a very high temperature and gives an incredible smoked flavour. In the absence of a Tandoor oven, the best substitute would be to make it on the grill. However, to be more practical, it can be done in the conventional oven or in an iron frying pan.

The most important of this chicken preparation is the marinade, which is made with yoghurt, garlic and ginger paste, dry spices and time, at least 1 hour. It is more common to find Butter Chicken made with pieces of boneless thigh and drumstick. You can use chicken breast, but you will lose juiciness. Also, nothing prevents you from using chicken pieces with bone. Now, we do not recommend using chicken pieces with the skin, it is not a common practice in curries.

The makhani curry is known for its velvety texture, so we learned to beat the sauce in the blender and add cashew nuts to thicken. If you want to skip that part, you can substitute the whole spices (such as cloves, cinnamon, etc.) for the same spices but in powder and use tomato paste instead of fresh tomatoes.

All Indian curries follow the same logic. First, you add the fat, in this case, butter or ghee, then the dry spices to flavour the fat. Next, you add garlic and ginger paste, onion, powdered spices and finally the other sauce ingredients.

This gravy serves as a basis for various other preparations, such as paneer butter masala, dal makhani, etc. It is worth making a larger amount of the recipe and freezing it in pots or Ziploc bags.

Finally, the dish takes heavy cream and toasted leaves of fenugreek (Kasuri Methi). The fenugreek is a very characteristic ingredient in Murgh Makhani, but it is also one of the most difficult to have in your pantry. If you don’t find fenugreek available, replace it with chopped coriander leaves on top.

Have you tried our Masala Chai Recipe? It is delicious!

This is up to you, adjust the amount of red chilli according to your preference. By following the measures of this recipe, it will result in a dish with heat, after all, the spices used are warm, but not necessarily have piquancy. Even in India, this is not a spicy dish, the red pepper used in the original recipe is Kashmiri Chili, a mild chilli, but with a smoky flavour and intense red colour. Therefore, we suggest replacing the original chilli with a mix of powdered cayenne pepper and paprika.

What is the difference between Chicken Tikka Masala and Butter Chicken Masala?

The term Chicken Tikka Masala is more popular than Butter Chicken Masala, but there is a critical difference between the two. Butter Chicken Masala, as we explained earlier, is an Indian dish, while Chicken Tikka Masala is an English dish. Well, the English are so fond of Indian food that they created their own version. Depending on the recipe, the English gravy may take a different spice mix, also it takes less cream and more tomatoes, but in general, the two are very similar.

How to make Butter Chicken Masala – Check out the recipe 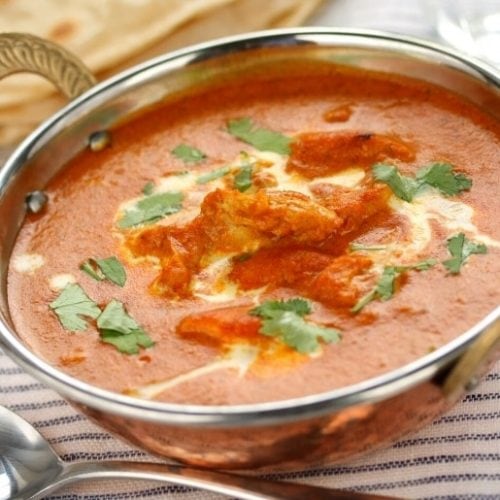 For the Chicken Tikka

For a vegetarian version, replace the chicken with Paneer (ricotta).
Tried this recipe? Share with us!Mention @foodandroad_ or tag #foodandroad!

Serve it with basmati rice and naan bread. Also, it is a good idea to add a bowl of raita, yoghurt is a great combination.