Skip to content
A famous delicacy from Hanoi, Vietnam. The Vietnamese Egg Coffee takes a bitter strong robusta coffee which contrasts perfectly with the sweet, firm cream made with egg yolk and condensed milk.
Jump to Recipe

What is the Vietnamese Egg Coffee

It is impossible to visit the city of Hanoi and not be surprised by the huge amount of cafes scattered throughout the city. It turns out that in many of these establishments if you order an egg coffee, they won’t ask you if you prefer scrambled or fried eggs. And do you know why? There, the egg is not a side dish for your coffee, but part of the recipe! Yeah, the egg goes in the coffee!

Cafe Trung (Cà phê trứng), translated as Egg Coffee, was created in Hanoi, north of Vietnam, and its fame spread throughout the country. The recipe for this coffee takes robusta coffee beans, egg yolks, condensed milk, and other ingredients well kept under a secret recipe.

See our list for more examples of traditional Vietnamese food!

Learn the language: Trứng in Vietnamese means egg, recognizing this word is useful for understanding the menus during your trip.

The history of Cafe Trung, from improvisation to fame

It all started in 1946 when coffee, introduced by the French during the colonization period, had already become a popular drink in Vietnam. Due to the shortage of fresh milk during the war with France, the supply of coffee with milk was jeopardized. To overcome the supply issue Nguyen Van Giang, who at the time worked at the renowned Sofitel hotel in Hanoi, decided to replace milk with a combination of egg yolk and condensed milk, inventing the first Vietnamese Egg Coffee. The result is a strong coffee with a creamy, sweet and dense layer on top.

Despite the success of this eccentric recipe that led Nguyen to open his own establishment called Giang Café, it took years of adaptation to reach the final recipe which still stands out from its numerous competitors to this day. It is said that Giang’s cream also takes butter and cheese. The main goal is to make the drink with the least possible yolk taste.

Where to try it

If you visit Hanoi or other touristic cities of Vietnam, you will find several places that serve Cafe Trung, but here is some advice from my own experience: none will taste the same as Giảng.

To find Cafe Giang in Hanoi City, go to the Old Quarter on Nguyen Huu Huan n. 39 (Open in Google Maps). Look out for the sign above the door, the entrance is small and the cafe is at the end of the corridor.

The cup is served in a bowl of hot water to maintain its temperature. It is a temptation not to eat the egg custard only, but the hint is to mix everything while drinking the egg coffee. The sweet cream in contrast to the bitter coffee is what makes the drink so special.

Do you like coffee? Have you heard about the Indian Filter Kaapi?

For that, you’ll need a strong and concentrated filtered coffee. In Vietnam, the Robusta type coffee beans are used. In addition to being locally available, it contains more caffeine, body and bitterness than Arabica beans. If you don’t have Robusta beans, replace with a double shot of Arabica espresso. There, coffee is filtered through a metal filter called Phin, it becomes more concentrated than coffee filtered on cloth or filter paper.

The great trick of the egg coffee recipe is to minimize the egg taste and here are two secrets:

The first tip is to beat the egg yolks well before adding the condensed milk. Ideally, use a stand mixer. The cream will be ready when it reaches a firm and aerated consistency. The second tip is to add a few drops of vanilla essence. Then, the well-beaten mixture of egg yolk and condensed milk is placed on top of the filtered coffee. 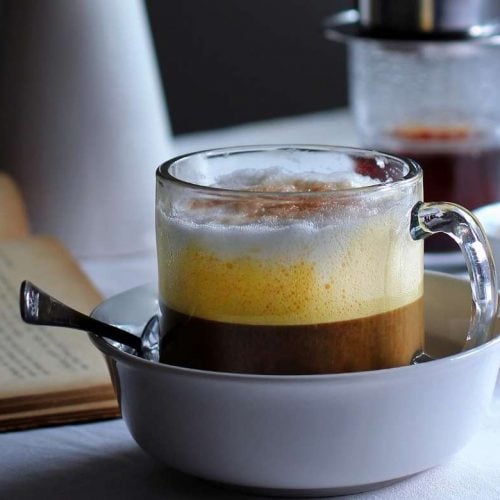