A great advantage of Spanish cuisine is the possibility to innovate without compromising important pillars of its gastronomic tradition. This is possible thanks to a culture built through unity and sharing, which values ​​the quality of local ingredients and places food at the centre of relationships. This culture I am talking about is the culture of tapas and pinchos (in Basque pintxos), which are the famous Spanish appetizers and snacks.

The Royal Spanish Academy defines tapas as “a small portion of some food served as an accompaniment to a drink”. These portions are equivalent to appetizers as they are called in other countries.

Even with internationally famous dishes, such as Paella Valenciana, the tapas culture best represents the diversity of Spanish cuisine and makes room for infinite varieties of portions without losing its essence by definition.

The most iconic region for tapas is Andalusia. There, tapas are served as an accompaniment to drinks. In other words, you order a drink and receive a free mini portion of some house specialties. In other regions of Spain and in more tourist places, tapas are part of a more complete menu and you pay for each portion.

The Spanish pincho is originally from the Basque country, where it is called pintxo. Also defined by the RAE (Spanish Royal Academy), the pintxo is a “portion of food consumed as an appetizer, which is sometimes pierced with a toothpick”. In other words, pintxos are assembled snacks, which a ‘toothpick’ (called a pincho) is used to attach one or more ingredients to a small slice of bread, hence the term pinchar.

There is also banderillas, a type of pintxo where the ingredients are all stuck on a toothpick without the slice of bread, usually made with pickled vegetables, fish and olives.

Currently, pintxo is found throughout Spain, but it is to the north that it represents an essential pillar of local gastronomic culture. In addition to the Basque Country, which includes cities such as San Sebastián and Bilbao, the regions of Navarra, Cantabria and La Rioja are also famous for the culture and quality of the pintxos.

Be careful not to confuse Spanish pinchos (pintxos) with Latin American pinchos, very popular in countries like Puerto Rico and Venezuela. The Latin version is more similar to the pinchitos, which are grilled meat skewers, also common in Andalusia.

Main differences between Tapas and Pintxos

Beyond definition, tapas and pintxos differ in several aspects, such as the use of cutlery to eat tapas while pintxos are eaten with the hands and in a few bites.

Another difference is that unlike tapa, which may or may not be charged as an accompaniment to a drink, the pintxo is never free, neither the drink that accompanies it.

Tapas and Pintxos encompass an entire gastronomic social movement that goes beyond food and drinks. This movement is known as ‘tapas’, ‘tapear’ and ‘picar’ and it means going out with friends or family to eat tapas, pintxos, drinking, and talking.

How to order Spanish Tapas and Pintxos

Except in the more traditional regions of Andalusia, where tapas come with the drink, if you go to a tapas bar in other regions of Spain, you will receive a menu with the house options and you will sit on a stool next to the counter or at the tables. It goes very well with beer, a glass of wine or cava.

There are two situations when ordering at pintxos bar:

In the Basque Country, toothpick also helps when paying the bill, as it indicates how many pintxos you ate.

The local favorite drink to accompany the pintxos is txacolí, a sparkling white wine. Other popular drinks are apple cider and zurito, as the half glass of beer is called.

It can be said that tapas and pintxos represent a kitchen of freedom. A place where tradition is valued without inhibiting creation. With respect to local ingredients and seasonality, it appreciates what is typical but also wins over the most varied food lovers with quality, creativity and good conversations. 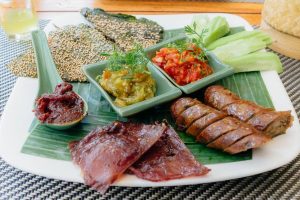 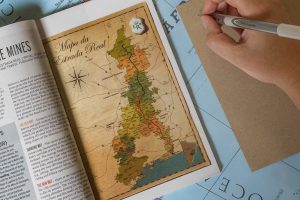 Discover the Estrada Real, the largest tourist route in Brazil

Not a potato gnocchi: my first online cooking class

The taste of Brazil: 15 Typical dishes of the country

The best natural teas and infusions for you to try

The 10 most traditional drinks in India