Skip to content
Larb or Laab is a type of meat salad seasoned with fresh herbs typical from Laos and Northern Thailand.
Jump to Recipe

Larb or laab is a meat salad seasoned with fresh herbs. It is believed that the dish is originally from Laos, but it is also popular in the Northeastern and Northern regions of Thailand, as well as being present in the menus of Thai restaurants around the world.

As it is very easy to adapt, there are many variations of Larb. It can be made with pork, fish, chicken, duck, buffalo or cow. Nowadays you can even find vegetarian versions with mushrooms or tofu. The spices and herbs may vary according to the region and the meat used, however, coriander, scallions and lots of mints can’t be out.

The preparation process is quite simple. It is made basically with minced meat (cooked or raw -like tartar) mixed with spices and herbs. Traditionally, the dish is served with sticky rice (glutinous rice: Khao Niao) and green leaves. It’s a mixture of surprising and refreshing flavours worth to try it out!

Read more: Sticky rice, how glutinous rice is consumed in Thailand and Laos

The main different versions of the dish

The meat is seasoned with padaek (fresh fermented fish sauce) and lemon. Also, it is added toasted rice powder (Khao Khoua) which gives texture, besides fresh herbs and chillies to balance the flavour.

It does not take fish sauce Padaek (it uses the refined fish sauce Nam Pla), nor lemon or any other sour ingredient. On the other hand, the dish is seasoned with several dried spices: Cumin, cloves, cinnamon, star anise, and dried chilli. This mixture of spices is called Naam Phrik Larb. The usage of dried spices it this dish can be traced back to Chinese influence, as the Northern region of Thailand was part of the Chinese spices route.

The most eccentric version of Larb – raw meat with blood

In both regions, there are traditional versions of Laab with very strong flavours. For example, in Laos, there is a version with raw buffalo meat, blood, guts and bile juice. Over there, the bitter flavour is highly appreciated and ingredients that bring this taste are added whenever is possible. The bile juice per example, adds bitterness to the dish and softens the meat.

By the way, the locals always eat the raw versions with shots of Whisky Lao Lao, it is said that alcohol kills bacterias and possible parasites. In popular tradition, the mixture of bitter food and alcohol is medicinal, brings vitality and strength.

Don’t worry, most restaurants, especially the touristic ones, only serve Laab with cooked meat, which is the safest way to experience it.

A popular dish in celebrations:

Larb is a dish that represents more than a meal, symbolizes cultural traditions and the interaction between people and nature. In the local language, Laab means good luck. Therefore, it is a mandatory dish in the main ceremonies.

It is present on the table of poor and rich people, and the difference is the type of meat. In the past, large animals, such as buffalo, were not bred for consumption, but rather to support agriculture. As a result, buffalo meat was eaten only on special occasions where all the community gathered together to prepare and consume Laab in a big party.

If you are travelling to Laos and Thailand, be sure to include this dish in your list, but first take a look at this recipe, it’s super easy to prepare at home!

Check out the recipe and learn how to make Larb 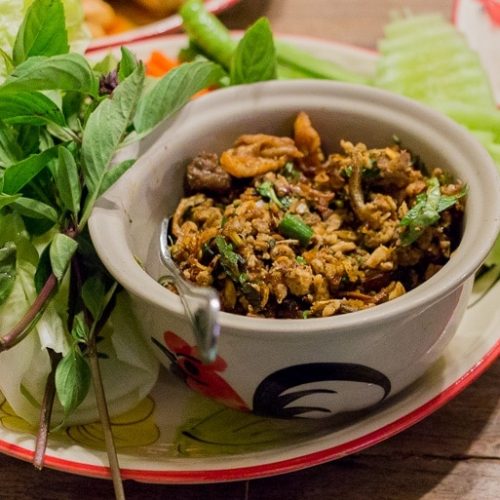