What can we do to increase population awareness about the risks of modern industrialized diet? The American photographer, Gregg Segal, decided to travel and take pictures depicting what kids eat around the world.

The pictures resulted in the project “Daily Bread” that aims to discuss our relationship with food.

The motivation behind “Daily Bread”

It all started when Gregg was developing another intriguing project called 7 Days of Garbage. In the process of photographing people’s garbage, he began to look deeper at food: what we’re eating and what we’re throwing away.

At that time, Cambridge University launched a study about different diets around the world. This study identified that among the 10 countries with the world’s healthiest diets, nine are located in Africa. In these places, the typical diet is based on fresh foods – vegetables, roots, grains, cereals, nuts, and fruits.

On the other hand, in places like the United States (Gregg’s country), where industrialized food is dominant and fast food is cheaper than real food, the majority of the population feeds on ultra-processed food – the great villain associated with obesity, hypertension, and diabetes.

The role of children in the project

Inspired by the topic, Gregg decided to understand this story more closely. He travelled for 2 years to different countries, seeking to visit places with strong food traditions, where home-cooked meals are still the bedrock of the family.

Gregg asked the children of these places to keep a journal of everything they eat during the week. At the end of the week, with the help of food stylists, he made the portrait of the child with the food listed in the journal arranged around them.

I’m focusing on kids because eating habits, which form when we’re young, last a lifetime and often pave the way to chronic health problems.

What kids eat around the world in pictures

A visual conversation for the sake of real food

The conclusion is always the same, the most important is to eat real food, avoiding the industrialized ones. We completely agree with Gregg- “When the hand that stirs the pot is mom or dad, grandpa or grandma, kids are healthier.”

“Daily Bread” is an amazing project that serves as a background for a topic that needs to be discussed. If you liked the photos, be aware that his photo book with the complete project will be released in 2019. 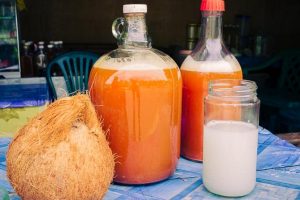 Tuba, the coconut wine of the Philippines

Discover 30 Thai Dishes For Your Trip

Learn how to use the banana flower in your kitchen

The truth about Paella Valenciana, its history, ingredients and how to make it

Vietnamese Food – 15 typical dishes you should not miss

Eat Malaysian Food – 15 typical dishes for you to try

Let the Francesinha from Porto welcome you

Connect with
I allow to create an account
When you login first time using a Social Login button, we collect your account public profile information shared by Social Login provider, based on your privacy settings. We also get your email address to automatically create an account for you in our website. Once your account is created, you'll be logged-in to this account.
DisagreeAgree
wpDiscuz
We use cookies to ensure that we give you the best experience on our website. If you continue to use this site we will assume that you agree with it.OkPrivacy Policy