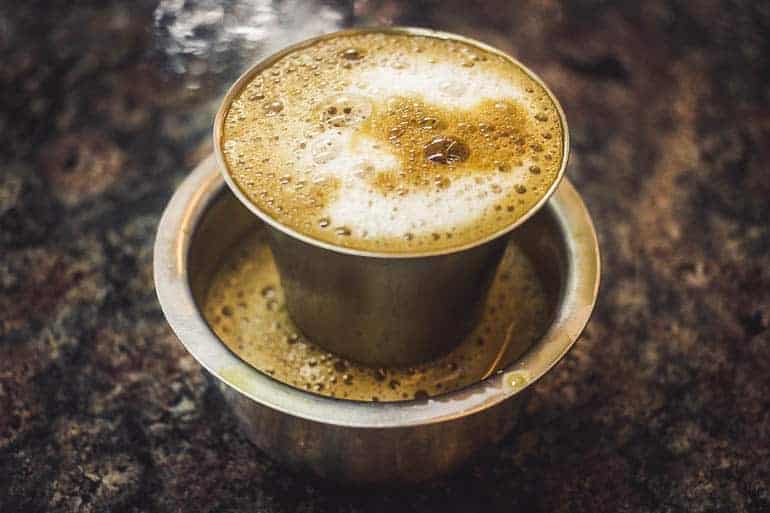 Indian filter coffee? That’s it! Despite Masala Chai‘s immense popularity, there is a strong tradition in southern India to drink a type of filter coffee with milk known as Filter Kaapi or Filter Coffee.

The Indian filter coffee is always mixed with milk and is known by several names according to the region of consumption and cultivation, for example, Madras coffee, Kumbakonam coffee, Mylapore coffee, and Mysore coffee.

India is the 5th largest coffee producing country in the world with exports volume between 70% and 80% of its production. Of the total produced, about 70% is Robusta and 30% Arabica.

The major Indian coffee producing regions of the Robusta type are Karnataka and Kerala while the regions of Tamil Nadu and Andhra Pradesh concentrate most of their production volume in the Arabica type. A very interesting feature of coffee plantations in India is the conservation of its natural landscape amid a lot of shade.

Read more: The 10 most traditional drinks in India

After all, what is the Indian filter coffee (Filter Kaapi)?

In a simplistic way, the Filter Kaapi or Filter Coffee is the Indian coffee filtered slowly with a typical local filter and mixed with boiled milk and sugar. But hold on, nothing in India is as simple as it seems. Let’s talk about some details below.

Characteristics of the Indian filter coffee

The Filter Kaapi differs by its aroma and intense flavor, creamy and frothy characteristics. Do you know what adds a lot to the characteristics of the Indian filter coffee? The Chicory!

The use of chicory as a caffeine-free filler is already practiced in other traditions, but in Indian coffee, the use of chicory is recognized by other functions besides the filler. The chicory is known for adding aroma and balance, intensifying the flavor, and reducing the bitterness of coffee, especially in the Robusta type. When it is added to the coffee, its proportion varies between 10% to 30% and is mixed after a process of drying, grinding, and roasting of its roots.

The Indian filter coffee – Filter Kaapi – is always served with milk and sugar. The fresher and fatter the milk, the creamier the coffee will be. The foam is intensified during the traditional process of mixing the coffee with milk by passing it from one cup to the other before serving.

The Indian filter coffee is prepared and served with the help of two utensils usually made of stainless steel, copper, or brass called Dabarah and Tumbler.

The tumbler has a cylindrical shape and consists of two compartments. The filter, coffee powder, and hot water are placed in the upper compartment. The bottom part is where the filtered coffee drips. Usually, the coffee is filtered slowly, the time can vary from 10 to 30 minutes or even more.

After filtering the coffee, the whole milk is boiled with the addition of jaggery, a type of raw sugar from India, and finally, it is mixed with the filtered coffee in the dabarah which is a small cup, and then served hot.