Wine tourism in Spain is one of the most prominent activities in local food tourism. You will find charming options of wine hotels in Spain to enjoy the countryside experience and immerse into the world of wine in beautiful vineyards and with exceptional labels.

Rioja, with its medium to full-bodied wines, is considered the most famous wine region in Spain. Another highlight is the iconic Ribera del Duero, on the banks of the Douro River in Castilla y León. To the north, Catalonia is home to the famous sparkling wine Cava. It is also the wine region with the largest number of Designations of Origin in Spain, including Priorat, Costers del Segre, Montsant, and Penedès. Galicia is internationally recognized for Rías Baixas and Albariño, while Andalusia is fertile ground for fortified Jerez. Embark on this tasty journey with our list of the best wine hotels in Spain.

Signed by Frank Gehry, the architect responsible for masterpieces such as the Guggenheim Museum Bilbao and the Walt Disney Concert Hall, the Hotel Marqués de Riscal is on the Rioja-Alavesa route and has a breathtaking futuristic look that already gives you an idea of what awaits you. The Michelin-starred restaurant, the spa by Caudalie with various vinotherapy treatments, and the wine cellar that includes vintages dating back to 1862 are some of the luxuries of this 61-room wine hotel in the Rioja region. With vineyards that date back to 1858, Marqués de Riscal is the oldest winery in the region and now has 1,300 hectares of organic production, forming the complex called “Ciudad Del Vino.” Voted the best winery in Europe and the 2nd best in the world by the World’s Best Vineyards 2021.

In the heart of the Rioja Alta sub-region, the Hotel Bodega Finca de Los Arandinos has 16 hectares of vineyards around the town of Entrena. The hotel has a spa and a restaurant, Tierra, which relies on creative cuisine with local ingredients. Among the experiences, tourists can choose to walk or horseback ride through the vineyards, tastings at the winery, candlelight pairings, and even balloon and paragliding flights. Its extensive wine list includes rare vintages from Rioja.

This boutique hotel has an enoteca, a spa dedicated to vinotherapy (with Turkish bath), and two restaurants. Guests can take tours of the vineyards, horseback riding, balloon flights, enjoy the rioja harvest, and take introductory courses to learn the methodology of wine tasting and explore the five senses. Hospederia de Los Parajes is in the heart of Laguardia, a medieval town in the province of Álava, considered one of the most beautiful villages in Spain.

Named the best experience destination by Leading Hotels of the World, this grand five-star wine hotel is located in a former abbey, surrounded by the vineyards of the Ribera del Duero region. The property has 30 accommodations and is less than two hours from Madrid in the Castilla y León region. Situated on 700 hectares next to the Douro River, the hotel has two restaurants: the Refectorio, with one Michelin star; and the Vinoteca, in the middle of the vineyards. Its wine cellar features a large selection of wines from the estate and the region, including old vintages of Vega Sicilia, considered one of the best wines in the world.

The Arzuaga Hotel & Spa is located among the vineyards of Ribera del Duero in Castilla y León and is considered one of the most impressive wine tourism complexes in Europe. Among the experiences, you can participate in tastings, tours of the Bodega Arzuaga facilities, wine classes, bicycle tours with a picnic, horseback riding, and harvest experiences. The hotel offers a full spa with vinotherapy treatments and has two bars and two restaurants, including the Michelin-starred Taller.

At the foot of Sant Pau mountain, in the heart of the Penedes Designation of Origin, the Mastinell Cava & Hotel offers 13 rooms with spectacular and unsettling views of the beautiful vineyards, thanks to the trencadis design inspired by the work of Antoni Gaudi. The building of this Spanish five-star boutique wine hotel draws attention by recalling the sinuous shapes of the bottles resting in the cellars. In addition to an extensive wine tourism experience that includes visits to the family winery, tastings, spa with cava bath, and grape treading during the harvest, guests can enjoy their countryside vacation with horseback riding, cycling, and balloon rides.

About 40 km from Barcelona, the Can Bonastre Wine Resort is located in the Penedès Designation of Origin region and is a popular wine resort for family vacations in the countryside of Spain. Overlooking Montserrat, the 16th-century property has 12 rooms and offers a range of wine tourism experiences, such as tastings of its 13 wines and a spa with various vinotherapy treatments.

Your vacations in the countryside of Spain will gain charm and elegance with this accommodation in a 19th-century hunting lodge surrounded by vineyards on the outskirts of Jerez. With a more intimate proposal, Casa Viña de Alcántara, in Andalusia, is a boutique wine hotel with only ten rooms, without extravagance, but with plenty of comfort for guests to enjoy the best of Xerez (Sherry Wine), among vineyards, gardens, swimming pool, and a lake. This wine hotel wins you over with its hospitality and offers a delicious breakfast, a great way to start the day in the vineyards of Jerez de la Frontera.

The world’s best-selling Jerez opened its first hotel dedicated to wine in 2020. The Gonzalez Byass winery, dating back to the 19th century, serves as a backdrop for guests. There are over 27 rooms in century-old bodega houses which have been transformed into luxury accommodations. From the outside, the hotel evokes the past, but its suites are modern and minimalist. The swimming pool is strategically located on the terrace offering stunning views of the imposing Catedral y al Alcázar. The various themed tastings provide wine experiences that will appeal to the five senses.

Located in the Toro wine region, the hotel has 35 suites with panoramic views of its vineyards. In addition to the outdoor pool and a large spa with exclusive experiences, the hotel also features five indoor pools for hydrotherapy sessions. In the gastronomic area, the hotel is home to the sophisticated Nube restaurant; the Enoteca Bar & Lounge, situated on a terrace with an inviting view of the sunset; and the Spirit Wine Club, by the pool and with a nightly program. You will also have at your disposal a sports center with tennis courts and a gym. Next to the Douro River, it is located 90 minutes from Madrid and the Portuguese border. 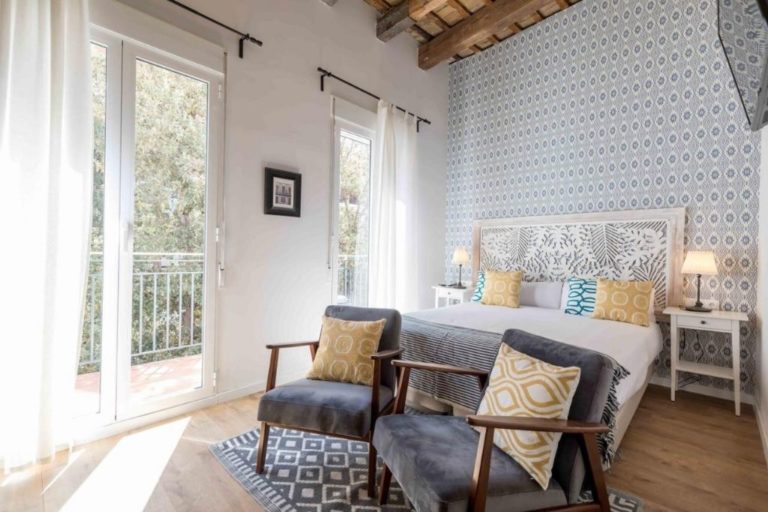